skip to main | skip to sidebar

Ripples in the pond

As a distraction from writing up my own notes, I'm starting to look for other people's blog entries about the conference. Found a few so far...

One from Melissa Terras at http://melissaterras.blogspot.com/ (she sounds a bit underwhelmed)

Another from those nice people at Intute at http://www.intute.ac.uk/artsandhumanities/blog/2008/09/18/thrill-seeking/

In case you were wondering what that strange noise during the coffee breaks was...
http://thingdom.wordpress.com/2008/09/17/digital-resources-in-arts-and-humanities-conference-cambridge-2008/

And a little twitter from Sue Thomas at http://twitter.com/suethomas/statuses/921766116
Posted by Lou Burnard at 23:11 No comments:

The End of Independant Thought

This was my quote of the day from Alan Liu (Monday's keynote) speaking in the context of collaborative teaching and learning. There's certainly evidence of a lot of independant thinking going on at DRHA, but also of interdependant thinking which of course is only natural when most people here are talking about collaborative research rather than research of the 'lone scholar' model. Alan Liu has been teaching his students using a wiki environment, which has led to questions of how to assess an individual's contribution, or final project - when so much is dependant on others how can you draw boundaries around what is 'yours'? He made the point that although technology increases the facility to, and likelihood of, collaboration amongs teachers, researchers and students, the focus of assessment in most educational establishments is still of the individual - where is the move towards new ways of assessment instead of increased policing ?

But it struck me that even if you claimed to be a lone scholar you would still be drawing on primary sources and making citations of the authors thereof - could the same citation rules not apply to teachers, classmates and anyone else that you feel has contributed to your paper, wiki or other output? The assessment of the final piece would be on how you had patchworked / melded / moulded those contributions together and come to your own conclusions or created your own artwork, for example. Could Marianne Schmidt's projections of text messages be an example of this? She depends on passers by for content - but the delivery is all of her own making (I'll post a picture later). The texts as seen on the buildling, suddenly several feet wide and available to all, take on a genuinely new meaning - but I still enjoyed pointing to the text I'd sent her and shouting out 'that's mine!!'.
Posted by Tamsin at 14:24 2 comments:

Technology as the muse of transdisciplinarity?

DRHA08 has officially opened and Sally Jane Norman got us off to a strong start with her talk on 'Collaboration and the Dynamics of Trandisciplinary Framing', followed by a trip through a number of sonic art works from Katherine Norman including her own 'Islands of one'. For me, these two presentations - one a traditional talk, one almost entirely sound-based - encapsulate the diversity of DRHA. Katherine alluded to the difficulty of defining what kind of artist you are, when you're crossing boundaries between music and literature and using technology to mix the two in to something entirely new. Sally Jane too, focused on the nature boundaries and their definition - or the redefinition that is required when they are crossed / transcended / redrawn. Too often we are constrained by the disciplines, sectors or even social strata within which we work and play - can technology help to transcend these constraints, when much technology itself is heirarchical and protocol / rule based (often necessarily so)? Can it be the muse of disciplinary redefinition? Perhaps a conference like DRHA, where people from many different backgrounds, traditions, cultures and practices but drawn together through their interest in and use of technology can help us to find out.
Posted by Tamsin at 21:28 No comments: 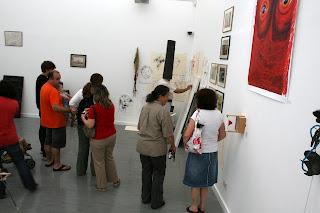 Now that the conference is well and truly in sight we're getting excited about the performers and speakers who'll be contributing to our digital community in Cambridge come Sunday. As well as more traditional papers we have digital performances, speakers in Second Life, and some interactive installations requiring the use of masks - Tim Long's 'A relay of Joy' (above) - and sensor-enhanced shoes - Tine Bech's 'Mememe' - that will make us think about how technology interacts with the body and environment.

It's great to have such a mix of presentation formats as well as such diversity of topics covered. On top of that we have delegates attending from Europe, America and Australia - some of whom know DRHA of old, some who will be attending for the first time. We look forward to welcoming everyone very soon.

The countdown is begining to this year's DRHA conference. Only 12 days to go and nerves are starting to fray...being a digital conference based around the theme of community, I thought I'd start a blog and hope that many of our delegates and speakers will join me.

DRHA08 has a packed programme with something for everyone. To find out more, click on the logo in the side-bar and you'll be taken to the conference website.
Posted by Tamsin at 11:36 4 comments: 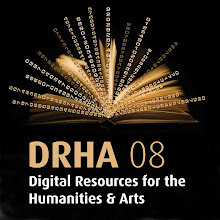